Do you know your practices as well as your potential whisteblowers? 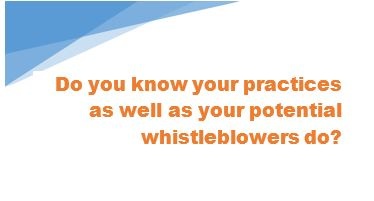 For example, the whisteblowers claim a UH sales agent promised iPads to customers who agreed to sign up and remain on the plan for six months.

Perhaps most seriously, UH kept two sets of books: one with misconduct complaints about UH; and another set of books that concealed the complaints from federal agencies. By hiding complaints, UH artificially boosted its quality ratings, which enabled it to receive $1.4 billion in Medicare bonuses in fiscal year 2016. For example, in March 2016, UH identified 776 complaints, but only reported 257 to CMS.

The whistleblowers also alleged that complaints were met with little investigation and little disciplinary action.

UH’s employees knew of these practices, and, in at least some instances, reported them internally. According to the whistleblowers, when UH did not address these concerns, the sales agents went to the federal government.

Whistleblowers are most often employees or former employees. Are you confident that you are aware of your employees’ concerns? Have employees made complaints? Were they resolved? Do employees know you took their concerns seriously?

One more thing before you go... Exit interviews as a compliance tool

The Society of Corporate Compliance & Ethics, and the Health Care Compliance Association recently issued a joint survey: Exit Interviews and the Compliance and Ethics Department (the Survey).The Survey evaluated companies' use of exit interviews as a tool to measure an organization's culture and detect non-compliance.

As part of their OIG compliance programs, health care compliance officers invest a lot of time and effort publicizing the compliance hotline and encouraging internal reporting.

The Compliance Whistleblower: Friend or Foe?

Some of the biggest Federal penalties for false claims begin with a call from a whistleblower. Employees who feel you are not addressing their concerns, or that you don't care about compliance, often turn to the government. By creating a culture of compliance and encouraging internal reporting, you can address problems without government intervention.

Whistleblowers are rewarded handsomely for reporting you