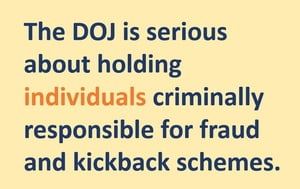 The former CEO of American Senior Communities (ASC) was sentenced to nine and a half years in prison. ASC manages 70 Indiana nursing homes.

Both sentences involve a $19.4 million fraud and kickback scheme lasting six years. Here is how the scheme worked:

As a result of these arrangements, the CEO took home an extra $600,000 a year (on top of his $1,000,000 salary), which enabled him to spend millions on private jets, trips to Vegas, diamonds and gold bars, lakefront property, and political contributions.

In 2015, the CEO asked a vendor to increase its bill by 30% and pay the excess to one of his shell companies. Instead, the vendor went to the authorities.

The DOJ is serious about holding individuals criminally responsible for fraud and kickback schemes. This raises the stakes for individuals running healthcare organizations. When is the last time your executives and board members were trained on compliance? Do they understand kickbacks, and the potential civil and criminal liability attached?